Mr Shiva Dindyal is a qualified Consultant Vascular and Endovascular Surgeon.
He is a consultant to Basildon and 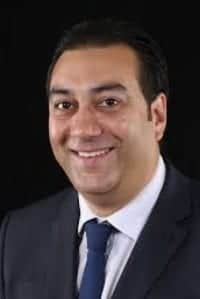 He was born and raised in London and medically trained at the internationally renowned Imperial College School of Medicine London between 1997 and 2003 where he gained a Physiology BSc degree in 2000, before completing his Medical and Surgical degrees.

Mr Dindyal completed his initial training in the Professorial Vascular Unit at Charing Cross Hospital then gained his Basic Surgical Training on the competitive Basildon, Bart’s and London Hospitals’ rotation, which included time in Plastic and Reconstructive Surgery, Orthopaedics in addition to General, Trauma and Vascular Surgery.

He completed the Membership of the Royal College of Surgeons for the Edinburgh and then English Colleges. He then was appointed in the Southwest of England Specialty Registrar rotation, learning and researching endovenous techniques.

Following this he studied for a Doctorate of Medicine (Research) into minimally invasive vascular techniques and imaging between 2008 and 2013. This included time working in Munich to learn specialist ultrasound techniques. Since 2013 he continued his research as the Barts and the London NHS Trust Circulatory Sciences Academic Unit Vascular and Endovascular Clinical Lecturer.

Mr Dindyal completed his Higher Surgical Training in the London Deanery – North East & Central Thames Specialist Registrar General Surgery rotation between 2010 and 2016 and a fellowship at the Brighton and Sussex University Hospitals NHS Trust. He then gained the Intercollegiate Fellowship of the Royal College of Surgeons of England in General Surgery with a sub-specialist interest in Vascular Surgery in 2015.

He completed his final years of training as the Senior Specialist Vascular Registrar in the world famous St Mary’s Hospital Vascular Unit, Imperial College Healthcare NHS Trust. He acted up at consultant level before and after gaining his Completion of Specialist Training Certification in this unit and was subsequently appointed as a Substantive Consultant Vascular and Endovascular surgeon in Basildon, Essex in 2016.

Mr Dindyal contributes to a wealth of organisations, including The Vascular Society of Great Britain and Ireland and the British Society of Endovascular Therapy where he has been a member of the executive committee. He is a past president of the Rouleaux club, which represents Vascular Surgery trainees nationally and has sat on the  Specialist Advisory Committee for the Joint Committee of Surgical Training. Recently he has been accepted to the exam writing board for the Intercollegiate Fellowship of the Royal College of Surgeon’s new Vascular examination. This allows him to continue his education and training interests.

He is part of the executive committee for the Circulation Foundation, which is the charity of the Vascular Society of Great Britain and Ireland, where he is in lead for patient support. This role involves expanding public knowledge, in addition to promoting early disease prevention, through the use of information leaflets and the internet.

Mr Dindyal’s research has been widely published in over one hundred peer reviewed journals. He has also contributed to several books. His research has been  presented worldwide including to specialists in Miami, Dubai, Rome and Munich. This includes developments in a number of General and Vascular Surgery areas such as the use of endovenous techniques in the ambulatory setting under local anaesthesia to treat varicose veins.

He has performed hundreds of varicose vein operations with conventional open surgery and endovenous techniques particularly including EVLA – Endo Venous Laser Ablation, the most successful minimally invasive laser treatments for the removal of varicose veins.

By continuing to use the site, you agree to the use of cookies. more information